Keeping sufficient distance from the vehicle in front of you is essential to avoid rear-end collisions. Nevertheless, the average road user in Flanders didn’t put the distance rule into practice. The basic rule for a safe following distance is however simple: on a dry road you must always keep two seconds away from your vehicle in front. 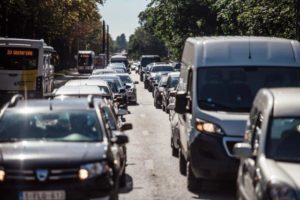 Recent research by the Flemish Foundation for Traffic Science (VSV) regarding social and defensive driving in Flanders learns that 57% of a group of 915 car drivers have felt unsafe during the last month. Almost 80% of the car drivers find that others are driving to close.

In 2016 almost 7.000 accidents where to close driving was the reason for the collision. American research turns out that tailgating increases the accident risk 13,5 times.

In February – March 2018 a campaign was organised by the Flemish Foundation for Traffic Science (VSV) that helps drivers keeping a safe distance.

The campaign slogan was  ‘Safe following distance? Sing Last Night A DJ Saved My Life ‘. The accompanying poster containing a stylized representation of two cars driving at a safe distance, with the campaign slogan in between on the road surface. As an eye-catcher, this message was painted on the road surface at two locations in Flanders for two weeks, on the E19 in Machelen in the direction of Antwerp and on the E40 in Denderleeuw in the direction of Brussels. The slogans on the road surface are painted over a distance of 70 meters, approximately the distance you travel in two seconds if you drive 120 km / h on the motorway.

The poster campaign was supported by a radio spot on how to maintain a safe tracking distance, and an online video based on testing the “Last Night A DJ Saved My Life” approach was tested with a number of drivers. The commercial was broadcasted on the main radio networks from 5 to 25 February. The video runs on Facebook and Instagram. There were also targeted advertisements on social media, and the traffic safety magazine “Kijk Uit” also paid attention to the campaign (Saturday 10 February to one).

An essential element of the campaign was to measure if the two-second rule was respected during and after the campaign. The collected data coming from ANPR cameras were also used to scrutinise also other effects relating to keeping distance like the distance of the middle car when three cars following each other. The research was also used to explore the use of ANPR cameras for alternative traffic safety use.

ANPR cameras are very powerful devices, but these cameras can measure traffic over more than one lane (even in opposite directions) can confuse the measurements. Datasets need to be cleaned up. This cleanup process is more complicated when you haven’t any number plate information. For privacy reasons only anonymised data was used. Another element was the camera frame rate that influences the measurements.

We overcome the challenge by using datasets based on two trajectories instead of one and by taking into account the measured camera interference patterns.

A second element was getting a definition of spacing between cars. This definition is based on the mental process of “when do we have the feeling of following a car”. With other words, what’s the moment we don’t have the feeling anymore of driving behind and what is a safe distance to stop taking the time to react and to brake safely.

A five-second period turns out as a reasonable maximum. A period between cars of less than 5 seconds was seen as “following”. In the case of 3 vehicles involved a 10 second period between the first and the third case was used as the maximum limit. The resulting curve of the 3 cars case and the 5 seconds rule between cars showed a kind of optimum curve. This curve is an indication that the 5 seconds rule is presumably a reasonable approach.

Both challenges clearly show that data processing is an essential step to turn raw data into data that can be used to draw policy conclusions. In PoliVisu we call the result of this process “Policy Ready Data”.