Issy-les-Moulineaux is a City in the outskirts of Paris, lying on the left bank of the river Seine. It is one of the 8 municipalities of the urban agglomeration Grand Paris Seine Ouest.

In France and particularly in the Paris area, the waste sorting is managed by urban agglomerations with the support of Cities, but it requests a good participation of citizens and/or building trustees. Actually, various type of waste collections exist and they have different rules to be followed:

Moreover, recycling centers are available, but they have particular rules of access which are not always well known by the users.

Additionally, citizens often struggle to know how to sort the waste, also due to improvements that are done time by time that make some goods to become sortable, while they were not previously. Today, 50% of the household waste are not sorted, while they could because of the lack of knowledge of citizens. The objective is to have 75% sorted by 2022 which makes necessary to help citizens to do so.

To this end, Issy created an application, with the support of the local experienced company Wedodata, to create a web application based on open data to help users to sort their waste and to have an easy to use guide. 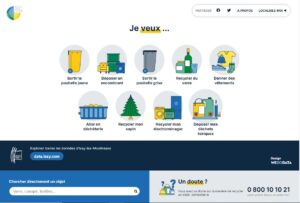 The process of the application was quite easy due to the type of data, from a technical point of view, is quite simple. At the same time, some important challenges were encountered building this application:

Referring to the second point, it was defined a list that can be easily updated through a simple online list in excel type of format.

It was defined an application based on simple principles:

The application, mobile first compliant, has been created to provide an easy to use menu with:

The data used were the open datasets (excel and geojson) of the portals of the City of Issy-les-Moulineaux and the Grand Paris Seine Ouest urban agglomeration.

This application allowed to understand how mobile version of these applications is particularly necessary as it is today used on more than 60% of cases via smartphone.

The application has really good use, more than 1.200 unique users per month, and it showed a really good feedback from the population.

Based on this experience, more applications will be done to use the existing open data and to make it useful.