Use of data to support citizens during COVID-19 lockdown

The period of lockdown, experienced by a large majority of countries in Europe, is an unusual and difficult period for citizens and for the whole population.

Cities are a front desk for people, but not they have not always been 100% involved, this makes them absolutely fundamental in supporting the population.

Issy-les-Moulineaux is a city that experienced a huge and important growth in the last 35 years, with population growing from about 40.000 inhabitants to 70.000. Moreover, the City attracted many companies that made Issy as one of the major digital poles in France and Europe, with a real positive consequence on employment. This makes the City having a really high population density and experiencing a huge transit, due to its economic vitality, making necessary in COVID time to help the citizens to respect the lockdown.

Due to the high density, it is really necessary to find solutions to reduce at the most the outdoor activities of citizens, particularly the most important need of people is having food and other necessary goods, but this is often uneasy to be obtained safely as supermarkets have big lines and many other shops/markets are today closed. At the same time, local commerce’s struggle due to the forced closures.

Issy-les-Moulineaux used data and created a co-creation process to make possible to support citizens to find open stores and delivery services. This was considered also fundamental to support local stores, often struggling due to the situation.

To this end, the City updated its open datasets about commercial services, created a dataset about delivery services and one about the usual sellers of weekly markets available to deliver directly home.

In parallel, the City created a facebook group to allow the various stores and sellers to show themselves for delivery services, making possible also to feed the various datasets that were updated according to the information provided by users.

The main challenge of this experience has been the exceptional situation that made data change really quickly, requesting a continous update to be done by some civil servants not used to work on it.

This made necessary the coordination of the open data portal responsible to train them to make them more comfortable.

The process (see image) has been implemented mainly through the collaboration between Issy Média and the department in charge of the commercial services.

Issy Média created the datasets, on the opendatasoft open data portal, and the department of commercial services collected and published the data. Additionally, Issy Média created and managed the facebook group and a dedicated page on the City website including maps and a table. 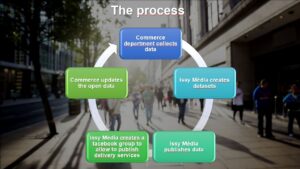 The raise of attention of users for the maps created was really huge and it showed how open data, if well presented, can be really useful.

This experience was really positive as it increased in a huge way the attention of users on the open data portal and other digital tools: